Growing a beard is not an easy task. Some men can only imagine having a beard. It is no longer a fad. A well-groomed beard can be a style statement. But growing facial hair can sometimes be overwhelming.

There are a lot of myths involved with facial hair & a lot of home remedies that claim to be effective for promoting facial hair growth.

Some people believe that shaving frequently can help boost the growth of facial hair and promote new hair growth. Some men also believe that the beard grows thicker, darker, and faster after shaving.

Another popular belief is that men from Asian countries like China, Thailand, Japan, Indonesia can’t grow a full beard.

So is it true that Chinese men can’t grow a beard?

Well, it is partially true. The growth of your facial hair mostly depends on genes. Some men are blessed with good genes and can grow a nice-looking fuller beard. While some people even struggle to grow a patchy beard.

Men from Eastern Asian countries usually have weaker beard growth than Caucasian average genetics. But that doesn’t mean you can grow a full beard.

There are a few over-the-counter medicines that can promote facial hair growth and can give you a full beard. Making certain lifestyle changes can also help you grow a full beard.

The growth of your beard is determined by your genes. The rate at which your beard grows depends on your testosterone that turns into another hormone called dihydrotestosterone (DHT).

Men with beards may be seen as more mature and as having a higher social status. They are more dominant in their field of work.

Many Chinese men have raised concern over how they feel inadequate and vulnerable due to lack of facial hair. They feel less confident in social gatherings because of not being able to grow a beard.

So why is it that many Asian men have a hard time growing full beards?

There are many reasons why it is difficult for some men to grow a beard. It is not just Chinese men who can’t grow a beard. Many caucasian men also have slower facial hair growth.

Here are a few reasons why many Chinese men have a hard time growing facial hair.

The primary reason for slower and insufficient facial hair growth is mostly due to genetics. Genetics plays an important role in determining your looks and facial structure.

Our height and many other physical attributes are passed from our parents. Genes are passed on from parent to child. Facial hair is also largely a result of our genes.

If your dad or grandparents had a thick full beard, chances are you will also be able to grow a full beard. But if your father struggled to grow facial hair, you might also have the same problems.

Chinese and Korean people usually have genes with low testosterone concentration. Androgens are a group of hormones that regulates the development and maintenance of male characteristics. It is responsible for facial hair growth and the depth of your voice.

An enzyme in your body called 5-alpha reductase converts the androgen hormone testosterone into another hormone called dihydrotestosterone (DHT).

Chinese and Korean men have significantly lower levels of 5 alpha-reductase enzyme which converts testosterone into DHT.

Most Chinese men also have more androgen receptors in their bodies which decreases the sensitivity of hair follicles. Due to lower sensitivity, DHT fails to bond with hair follicles and promote hair growth. 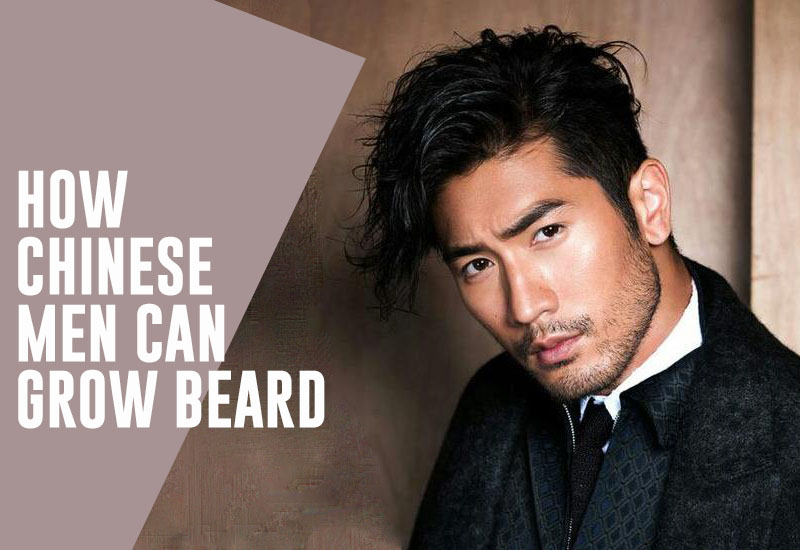 After reading all of these you probably have given up your dream of rocking a full beard and started blaming your genes. Well, don’t lose hope so early. There are still a few things you can do to promote beard growth and grow facial hair faster. Here we will discuss all the tips and tricks to help you grow your facial hair and how to maintain your facial hair. Following these tips can help you achieve a full-grown beard within 12 months. These are medically proven ways of growing a beard faster.

If you have been looking for beard growth products, you probably have heard about minoxidil. It is a medically proven serum that promotes hair growth. Minoxidil is sort of a wonder serum that works great for men with little facial hair. It is the most effective over-the-counter drug for beard growth.

Minoxidil was primarily used for ulcer medication. Surprisingly it has a powerful side-effect. Minoxidil can also be used for increasing scalp and facial hair. Because of its blood flow-improving effects, researchers decided to use it as a hair growth drug.

Minoxidil is widely used for treating alopecia areata and male patient baldness. There are several studies that show the effectiveness of minoxidil. It is widely accepted as being one of the most reliable and effective methods to stimulate new hair growth and prevent hair loss.

This is a common beard related question that is frequently asked in online forums. So can you use minoxidil to grow facial hair? Yes, you can. Over the years thousands of men around the world have used minoxidil and have seen positive results. Daily use of minoxidil on your face can promote beard growth.

How Long Does It Take For Minoxidil To Grow Beard?

Even though there is very little evidence of Minoxidil working for growing facial hair, it can take nearly 6-9 months to see visible results. Many dermatologists suggest using minoxidil 5% for at least 6 months to see any changes in the thickness and volume of hair.

Does Minoxidil Work If You Have Little Or No Facial Hair?

How Many Times Should I Use Minoxidil

For the best beard growth results, apply minoxidil twice daily preferably in the morning, and before you go to sleep.

Micro-needling is another popular technique of accelerating beard growth. For years people have been using micro-needling for skin rejuvenation. It is the process of inserting very fine short needles into the skin to increase blood flow and encourage healthier hair.

You can use a beard roller or derma roller to massage your face to increase blood flow. It’s a small handle with a wheel that contains hundreds of tiny needles.

Microneedling is quite effective to stimulate beard growth. Derma Roller is used to create tiny pores in your face by puncturing tiny micro-tears into the skin surface. Microneedling is a painless process that tricks your body into sending fresh nutrient and hormone-rich blood into your face. It also increases the production of natural collagen in your skin. Micro-needling can stimulate new hair growth and make your beard thicker.

Mucuna Pruriens (velvet bean) is an ayurvedic herb commonly used in Indian. Because of its health benefits, it is widely used for increasing testosterone levels in men. It also prevents infertility and boosts sexual potency in men.

Chinese and Korean men have lower testosterone levels and significantly lower levels of 5 alpha-reductase enzyme that converts testosterone into DHT.

Velvet bean can be used for increasing both of these components in your body.

There are a lot of products that claim to be effective for growing facial hair. But most of these are false claims. There are only 2 medicine minoxidil and finasteride that is medically proven for promoting facial hair growth. But more on that later.