Sajeeb Wazed Joy, Adviser to Prime  Minister’s ICT Affairs, yesterday asked the authorities of National Board of Revenue (NBR) and Bangladesh Telecommunication Regulatory Commission (BTRC) if possible to settle the dispute over the telecom regulator’s claim that Grameenphone and Robi owe the government Tk 13,446 crore. The meeting was held in Gono Bhabon where Joy said he would prefer an out of court settlement with both telecom companies.

A number of options have been discussed to resolve the ongoing battle, but no decisions are yet to be made.

It was suggested to form a committee to review the audit reports that found that the carriers owed the government Tk 13,446 crore. It was also suggested that the companies should be asked to deposit a decent amount to a BTRC account before the review starts. The amount would be adjusted after the review concludes.

Right now Bangladesh is going strong in economy and we are seeing foreign investors showing interest investing in here. The government s not willing to take any risk that would hurt foreign investment and slow down the economy. Telecom Minister Mustafa Jabbar said the government has been trying to diffuse tension between the two companies and the telecom regulator. “We will not do anything that may hurt foreign direct investment to the country.” He also added that the problems will be sorted within a short period of time. In the upcoming days' representatives of the NBR, BTRC, and the two companies will hold several meetings and prepare a framework to solve the crisis, sources said.

The High Court on Thursday issued a two-month injunction on the BTRC’s move to release the money from Grameenphone.

The BTRC on Sunday also went to the Supreme Court and appealed for a stay on the injection. The court would hear the appeal on Thursday.

Executive officers from both the companies and government officials attended the meeting to resolve the issue with both companies. 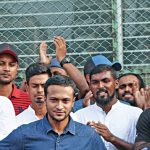